March 09, 2014
About a year ago, I watched two very talented gentlemen perform at their Kenshikai Kyoshi (5th degree black belt) promotion. I wrote about them here.

I also said that after watching them I realized that I had no interest in ever taking another promotion. Ever. 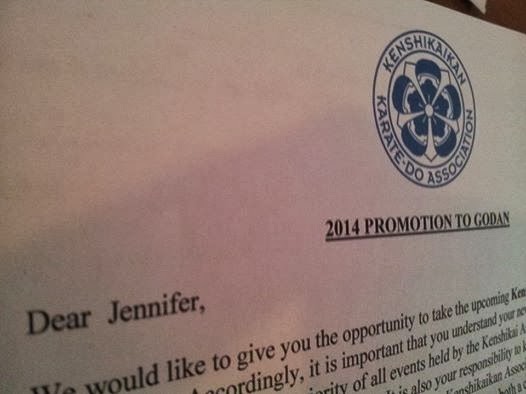 Yeah that is an invitation to attend promotion. Addressed to me. For the end of this month.

I didn't lie. As of 6 months ago, I was pretty certain that when the time came for me to receive this invitation, I would respectfully decline.

It is an honor to be asked go for promotion. But I felt that I was not the student I was 7 years ago when I went for Sensei. I didn't train like those other guys. I was more focused on teaching. And to be honest, I was often far more interested in perfecting my arm bar, than in working on my katas. And all that was fine. After 25 years of karate, my training should have changed. I shouldn't be the same person I was before. And as a dojo owner and karate instructor, I should be more focused on the success of the dojo. But all those things do not add up to someone who deserves to be promoted to Kyoshi.

All Kenshikai black belt candidates, from first degree all the way up to seventh, are required to write an essay on the philosophy of their karate training. Once this promotion is over, I plan to publish mine for all of you to read. I wrote it this morning.

For now, lets just say that I realized that what I said last year was wrong. I am still one hundred percent dedicated to being a student. A student of teaching karate.

There are a lot of reasons to be awarded a new belt. Not all of them have to do with how many classes you have attended, how many pushups you can do, or how many Japanese words you can recite.

I have been teaching kids class at our dojo for 8 years. And every time I step in front of those little ones I try to be better at it. The days when things do not go the way I planned (and there are many) I go home and play the class over in my head, trying to figure out what I could have done differently. My husband and I have long conversations (usually in the car) about how we can improve the dojo. In other words, I put a lot of effort into trying to be the best instructor I can.

I also still take a whole lot of classes. Both karate and BJJ. I am still the highest ranking women in our dojo. I still try to do the best I can every time I step onto the floor. And I still think I do a pretty decent kata. Hurt shoulder and all.

For all these reasons I am honored to be attending this promotion. And to be honest, also a little terrified. When Shihan Leighton handed me that letter yesterday (and took my black belt away!) I felt panicked. What was I getting myself into? Who do these people expect to see up there? My punches don’t look like those other guys. My shoulder injury means that lately I have been working more on precision than power. I have no interest anymore in pushing myself to the point of injury. I just learned that sai kata a month ago! All of our students are going to be so excited for me and I am going to disappoint everyone!!


Ok, so I have a few issues.
But that is ok. I still have two and a half weeks to work on them.

And then, the rest of my life.