My Dentist is Clark Kent 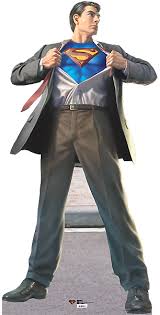 My mouth tastes like the dentist. That sounds lewd and inappropriate but trust me, it isn't. I have a fake tooth that is attached via a metal bridge-thingy to two neighboring teeth inside my mouth.This is a poor person's implant. When the original tooth was extracted many years ago, I contacted my insurance company to get permission to have a fake tooth put in and was told that they would not cover the procedure. According to the nice Indian guy named "Lance" I already had "enough points of contact." This is dental insurance speak for "Hey lady you don't need that extra tooth. You have plenty of them teeth still in your mouth for the chewing and tearing your steak and whatnot. Who cares if you look like a first grader on picture day?" Since I didn't really want a gaping hole in my mouth, the bridge-thingy (at $1200!) was the cheapest fix. And it works fine, except that every four or five months it comes loose from all the eating I do and I have to go back to the dentist and have him glue it back in. Which is what my mouth tastes like now. Sour, chemically, dental cement stuff. Kinda like the inside of a shoe factory. Yum!

There are two dentists at my office, Dr. Kessler and Dr. Stimmler. Dr. Kessler is an older man with a round face and glasses who makes cute and slightly awkward jokes while he looks in my mouth. He reminds me of my uncle. He is friendly and cheerful and always seems like he is having the time of his life. Not in a creepy Little Shop of Horrors way, but in a happy to get out of bed and put on the latex gloves kind of way. Which I don't get because being a dentist is gross. Even grosser than being a mom, and that is saying a lot. I really don't get the motivation. Like one day, you were sitting in your college dorm room high on mushrooms and you were like, I got it! I know what I want to do with my life. I want to spend eight hours a day with my fingers all over some dude's stinky gums.

Today, while he was fixing my tooth, Dr. Kessler and I talked about the upcoming holidays. Or should I say, he talked and I mumbled. Why do dentists even bother making conversation? How am I supposed to answer you when your fingers are busy probing my mouth and my tongue is ready to shrivel up from that horrible tube that sucks all the moisture out so you just sit there wishing you had a Slushie. And what is up with the multi-tasking? Why is it ok for a dentist to strap you down, stick some awful tasting metal thing in your mouth and then tell you to sit still for a minute while he goes into the room next door and pulls the other guy's wisdom tooth out? This practice makes me nervous. What if he forgets who is getting what and I end up toothless? Can't we have a one patient at a time rule?
The other guy, Dr. Stimmler, is young, somewhat Irish looking, and practices jiu-jitsu. I know this because on my very first appointment with him, about a year and a half ago, he stuck the stupid cotton wad in my mouth and started talking about some UFC fight he had watched over the weekend. We then proceeded to spend the entire rest of my visit discussing the merits of MMA and BJJ. Which sounded like this. Him: "I think triangle chokes are awesome." Me: "Hrrmmm mrrrph ummphplata urph." And so on. But now whenever I see him, we talk about training. He tells me about his Brooklyn gym. We exchange tips on sweeps from open guard.  It almost makes the whole dentist experience enjoyable. Almost.

All complaints aside, both dentists do a good job. I especially like talking about BJJ with Dr. Stimmler while in the chair. I like imagining the evenings when he exchanges his bright blue clinical robe for the thick fabric of a gi. (Again, not in a lewd, inappropriate way.) It makes me wonder who else out there is training. As a person who does martial arts for a living (and is married to a man who does the same), my perspective is way off. It is easy to assume that everyone trains all the time, when in fact, most people have real jobs during the day and put on their gi later. When another mom sees me chasing Maya around the playground I doubt she imagines that I am also a 4th degree black belt in karate and a blue belt in BJJ. Do any of the teachers at Maya's school practice arm bars in the evenings? What about that mom pushing her stroller around the supermarket? Perhaps she takes Taekwondo every night at 7.

Sometimes when I am sitting on the L train, looking around at all the random commuters, I like to imagine that each of them has a secret identity. Like Clark Kent transforming into Superman. I picture the guy in the immaculate 3 piece suit rolling around on the mats with a giant purple belt. I imagine that the woman with the perfect makeup is also an expert at Iaido, the traditional Japanese art of the sword. And so on.

I hope that everyone does. Have a secret passion, that is, an identity beyond simply a guy in his office. If it is not jiu jitsu, than yoga. If not kickboxing, than ballet. Whatever. So long as when you get off work you go home, put on your superhero uniform (be it tights and cape, or gi and belt), and take flight.