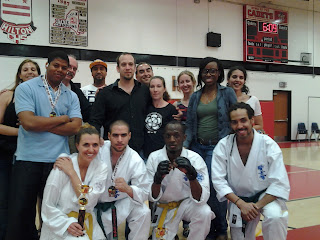 "In all my years of seeing and participating in the very individual sport of karate, I have never witnessed a group act more like a team then my students did this weekend."  Sensei Matthew Fremon (aka, my husband) via Facebook.


This weekend Matthew and I traveled with a group of our students to Rochester, NY for a karate tournament. Along with the 5 competitors were 4 other students of various ranks and 3 friends and family members who had all come along on the 6 hour drive just to support the team. If you add the numerous phone calls, texts and Facebook messages from people back in NYC that were nervously exchanged throughout the day it adds up to over 25 people personally and emotionally invested in the success of 5 karate students.


Our dojo came home with 2 third place awards, 2 second places and 2 first places. Everyone who competed got a trophy or a medal in either kata or sparring.  I am incredibly proud of them but this is not my story of the weekend.


The people who traveled with our team sat in a car for no fewer than 13 hours. They spent 9 hours inside a high school gym in a small town in the middle of nowhere. (This tournament moved slower than any I have ever been to, and that is saying a lot.) They took photos and got water and held pads and leaped around like cheerleaders at a football game. As for Matthew and I, despite the fact that we were childless on this adventure, it was not a vacation. It was business travel. (Without the comfy airline seat and free peanuts.)  But not sitting in a meeting wishing you were sipping a margarita business travel. The kind of work that involves holding pads for antsy fighters, giving pep talks, and mostly waiting, waiting, waiting for something to finally happen.


If you had asked me at 2pm yesterday where I wanted to be I would have said absolutely anywhere but inside that gymnasium. Now? Well, to tell you the truth I almost miss it.

One of our fighters was a woman who I have become quite friendly with. As the female sensei in our dojo, I felt it was my responsibility to take care of her all day, which turned out to be a much longer time than anyone had anticipated. There was a lot of time to become quite emotionally invested in her experience.This was her first tournament ever and she was nervous. Very very nervous. You know what is great for competition nerves? Waiting. For hours. In a gym where there is nothing to do but watch other people fight and think about all the terrible things that could happen when it is finally your turn.

She won first place but that is not why I am proud of her. At any point in this long ordeal of a day she could have taken off her gi and said screw this, I am too scared. But she went out there and fought anyway. Shiny gold trophy, $10. The knowledge that you can overcome fear, priceless.

Two of our fighters also teach the kids classes at our dojo and all the kids knew that they were competing this weekend. Like the woman, one of them was doing it for his first time ever. During the weeks leading up to the tournament the kids were full of questions. "Are you going to wear gear?" "Are you going to hurt someone?" "Will you end up in a wheelchair?" (I swear I am not making this up, someone really asked that!) He went out there and fought his heart out against a really tough opponent, tied in the first round, went to overtime and eventually lost the decision. He also won second place in kata.The kids are going to be really really proud of him.

We had two fighters in the final three of the men's division. Both are extremely skilled athletes. They randomly drew a name out of a hat to see who would get a bye into the final and the other guy got it. Instead of fight each other (which would have been silly and a complete waste of energy for the winner who would still have to go on and fight for first) one of our students chose to bow out and give the opportunity to his training partner, who went on to win first place.

Karate is not really a team sport. Despite a very loud (we are New Yorkers after all and I am from BROOKLYN!) cheering section, when our competitors are out there they are out there alone. Or are they? These guys (and gal) trained for weeks in packed classes. They traveled with other students, some of who have not taken more than two or three sparring classes themselves. They had Matthew's voice in their head (and alongside the ring) the whole time. Moreover, they had teammates there who knew exactly what they were going through, teammates who, rather than sitting in the corner with headphones on (believe me there had been plenty of time for that already) were standing right there ringside cheering them on.  I saw hugs and handshakes. I saw one guy, slumped in a chair, still exhausted from his own battle, leap to his feat to shout encouragement to his buddy in the ring. And of course, the one who bowed out to let someone else become a champion.

In some schools,  martial artists compete often and travel to tournaments alone, or with a few buddies to fetch water and shout from the sidelines. The teacher stays home and waits for a text at the end to see how it has all gone. The other students, those who helped the competitor along on his journey, are home as well, or perhaps even at another event compiling their own set of stories. Perhaps they share them later that evening via Facebook or Twitter.

I don't know that there is anything wrong with this kind of competing. But I know that my Facebook homepage today is flooded with photos of the weekend, from all different people, all with excited captions like "Supporting the team in Rochester! Can't wait!" I know that I texted three people on my drive home who I had just seen an hour before and it wasn't just because I was bored. I know that I got a phone call this afternoon from the last car group heading home (they stayed an extra night). She didn't really have anything to say but we are in the car, see you soon. Funny thing is, I had just been thinking of calling them, for no reason except to say hi, drive safe, see you soon.

Our dojo won a lot this weekend. But what will linger long after the shin bruises heal, the adrenaline fades and the shiny trophies tarnish, is the bond of shared experience. The feeling that everyone, from the fighters in the ring, to the cheerleaders in the stands, to the yellow belt who drove 7 people both ways simply because he had a car to offer, everyone was in this together.