Listening. So and so is a "good listener." We talk so much about it, but many of us have no idea how to actually do it., so caught up in the words inside our own head that it is almost impossible to hear anything else. Yeah I am listening to you, but not really, I am really thinking about the next thing I am going to say. I am listening to you, but not really, because even though you know an awful lot about this, deep down my egotistical brain still thinks I know better. I am listening, but not really because even though you just showed the technique in perfect detail three times, and I swore I was really paying attention, somehow when it was my turn to drill it all I could remember was the color of your rashguard. (Red, it was red.)

There are a lot of things Shuseki-Shihan Oliver used to say to us while we were lying there on the hardwood floor, drenched in sweat, attempting to catch our breath. "You're not tired, don't even think about it." "Fall down seven times, get up eight." "You should have kept your hands up." I would love to tell you that I was always listening back then. Even more than that, I would love to tell you that I am always listening now, but those of you who have had the misfortune to be my BJJ partner late on a Friday night, would know differently.

I have learned that it is really, really hard to see the people I love in pain.

I have learned that it is really, really hard to accept all the things I cannot control.

I have learned that it is really, really hard to escape a fully locked triangle.

People often ask me if I miss William Oliver. The truth is, I don't. I don't because every day I get to put on my gi and tie my belt and teach small children karate the way it was taught to me. It is hard to miss someone who is always there.

It is a funny thing when someone's death creates your entire life. I do not know where I would be today if Shuseki Shihan Oliver had not died 14 years ago. But I know that I am so so blessed to be able to train, to teach, to help run our wonderful dojo. I am blessed to have a daughter whose has strength and grace and compassion far beyond her years, and to have a husband (and teacher) who is one of the only people I know who truly listens to the world around him. I am blessed to have friends and training partners who get that this life is hard and that the hard is often what keeps you stepping onto those mats time and time again.
Would I have all of these things if my former teacher were still alive? That is something I will never know.

So I choose to honor him by being grateful, by loving those that I love fully, without limits, by teaching my little ones everything that I know, even when they are not at all listening, and to train, very, very hard for as long as I am able.

Thank you to all of you for allowing me this opportunity. See you in class tonight!
Osu! 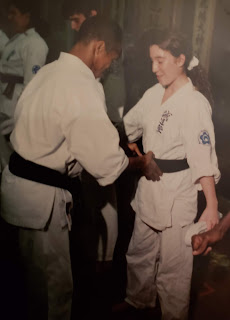