But this other stuff? This stuff someone tried to convince us was normal?
It is bullshit. All of it.

The part about your body falling apart. About you not being able to do what you used to. About your sore back and aching knees being just "a natural part of aging." About how "everyone is tired all the time." All lies. Your back hurts because you spend all day sitting at a computer and your knees hurt because you never use your damn legs. You are tired all the time because everything you eat comes in a box and everything in that box is full of sugar.

The only real reason your body can't do what it could do when you were 25 is that you have given it permission to stop.

Don't feel bad, I used to believe it too. But then I stopped listening to that crap about exercise meaning a miserable hour on the treadmill that we "all hate but have to do." Exercise is play. It is dancing. It is running, outside, because you love to run, not because your Fitbit tells you to. It is grappling, basketball, climbing a mountain, anything that gets you off your ass with a damn smile. Stop believing those lies that men are only allowed to jog  slowly and lift weights and women to jog slowly and do yoga.

If you are going to run, run fucking marathons!

And all that crap about having to work a 9 to 5 job that you hate so that you can pay your mortgage or your rent or your cellphone bill? Normal, right?

Wrong! Remember when we were six? And some teacher asked us what we wanted to be when we grew up? And I said a ballerina. Or an Olympian. Or a firefighter. 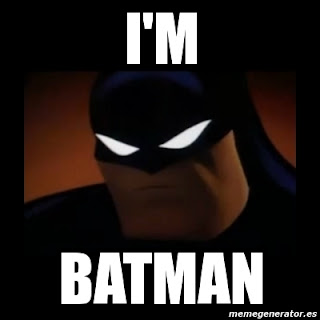 Of course we all have bills to pay. So if you have to work at Starbucks all day, at least when you get off work go be Batman. Go find some mats and play. Go to the courts and play. Go rent a studio and play. Get on a stage at an open mike somewhere and play.  Have kids to deal with? Take them with you! No one is better to play with than your kids. I know you think you are supposed to sit on the couch, open a beer and watch the game but that it only because you have forgotten how to be IN the game. Don't worry your son will remind you.

And you know how they convinced us that we are supposed to save our money for the big things? Like houses. Cars. Vacations. Instead of spending it on the little things like taxis, good sandwiches, glasses of wine.

Lies, all of it. Life IS the little things. Your two week vacation in Burmuda lasts for two weeks. Plus maybe a few minutes of reminiscing over Facebook posts a year later. Your life is what you do every single day! Your job. Your commute. Your friends. Your family. That is the stuff that actually matters. Spend your money on that.

Listen with all the bad stuff that is outside of our control, don't you think we should make some choices while we still can?

Life is hard, ya'll. Its hard, and its sad, and its scary. But there is joy and beauty and peace and in order to notice all that you have to actually sit still for a moment. You have to pay attention. Otherwise, you'll miss it.

I know, I miss it all the time.

That crap that life is all about suffering until you can retire? It's bullshit. Life is not the vacations and the cars and remodeling your kitchen. It's the sound of coffee percolating and the smell of your kids hair and the taste of sweat on bare skin and the backseat of a taxi when it is pouring rain and your umbrella is broken and the feel of rocks on chalked up fingertips and it is love and it's tears and it is trying and failing and trying and failing and sometimes really really succeeding and you are missing it.

You are missing it.
YOU ARE MISSING IT!!!

Take an Uber to work.
Order the nicer wine.
Get up early and watch the sunset with your five year old. Better yet, give the nanny the day off and take your five year old to the zoo. Watch the gorillas. Remember how to be human.
Take a class on Tuesday
Take a class every Tuesday.
Take all the classes.
Finish that book. Start a new one.
Put your kid to bed. Smell her hair. Seriously, its awesome.
Sit on a park bench and listen to the sounds of dogs barking. Better yet, give the dog walker the day off and take your dog to the zoo.
Be Batman.

You are not meant to be slowly crawling towards death.
You have just forgotten how to live.