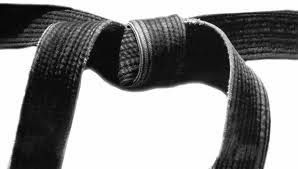 It is that time of year again. No, not the weary end of winter exhaustion, although I will admit to groaning out loud while brushing snow off the car window again last night. But that whining is for another post. March is coming. Time to once again write about promotion.

Whenever this subject comes up, there are people who get a little uncomfortable. This is because in many traditional dojos, belt advancement is not something you talk about. You are supposed to just keep showing up to class and when your instructor thinks you are ready for a new belt, he or she will invite you to attend the next promotion. Asking him about it is unheard of and unacceptable.

Of course, there are a million different styles of martial arts and a million different ways to do promotion. I described a few of them in this post awhile back: http://mamommyarchives.blogspot.com/2014/09/new-belts-for-all.html. Some places count classes. Some martial arts, like karate, have a clear syllabus for each rank. Some schools base it completely on performance in competition.

Having so many different philosophies leads to much debate about whether or not a student "deserves" his or her rank. Lets say my school promotes white belts after 60 classes. What happens if you have taken your 60 classes but I can consistently "beat" you in class? And what if promotion is based on performance but I am smaller than everyone, or older, or have some kind of physical limitation. If I am unlikely to ever tap out any of the giant white belts in class, does that mean I should never get a blue belt?

This debate goes on and on. What about the black belt who is 70 years old? What about the young super athlete who can out-muscle everyone in the room? What about the student who comes to class 7 days a week for years but just learns things a bit slower than everyone else? What about awarding children adult black belts? What about the one woman in a class full of bigger, stronger men? What about high ranking "sensei" who never teach? And so on and so forth. If martial arts is about fighting, than shouldn't the ones who win all the fights be the highest ranked? And if martial arts is about knowledge, than shouldn't we just give belts to the students who have memorized the most techniques? Don't even get me started on the money issue, those schools where you can sign up for the "black belt club" on day one and so long as your checks don't bounce you are guaranteed to get there in 3 years.

It is nearly impossible to identify a "best practice" when martial arts systems are so varied. What works for a karate dojo may not work for a BJJ school or a judo club. Besides, an argument could be made that wondering whether or not a student "deserves" their rank is missing the point entirely.

What is a black belt to me? Someone who has committed multiple years to the study of a martial art. Someone who shows a high level of proficiency and knowledge. Someone who gives back, either by teaching classes or simply by encouraging lower belts when they need it, which is often. Someone who cares about the world and the people around them and contributes to the good in it. Do I expect a black belt to win every bar fight? No, I couldn't care less. Rather, I expect them to be a person I would not mind having a drink with.

Furthermore, assuming you (or I) could accurately assess the worthiness of every student who receives a new belt at promotion time is not only extremely arrogant, it is blatantly disrespectful to the teacher. I train at a BJJ school where belt advancement is usually a surprise and the criteria for promotion is a mystery. I have no idea what goes through my instructor's mind when he decides to give someone a new belt, but I assume it is based on something. I assume there was a thought process in there somewhere. I trust he knows what he is doing and when and if I ever get a purple belt it will be because he thinks I am ready to be a purple belt. Period.

In contrast, I promote one of my little white belts (or many of them) to blue belt every two months. Some of them have simply taken the "right" number of classes, a milestone that we decided on many years ago. Some of them are the "Hermione Grangers" of the dojo who can perform every move perfectly and answer every question on command. Some of them cannot remember a thing, and do not know their right from their left, but at the time of promotion they can stand still for a full five minutes, a feat that when they first joined seemed as impossible as winning the marathon.

They all really, really love karate.

So who "deserves" to be promoted? People who train. The students who come to class whenever they can and try their best to learn and improve every time they are there.

Who does not "deserve" it?
The ones who quit.