January 12, 2015
If you were anywhere near my Facebook account this weekend you may have noticed that we did some karate. There are multiple photographic records of this event. If you missed them, because you were doing something more valuable with your time than scrolling through Facebook, here is by far the most interesting of the bunch: 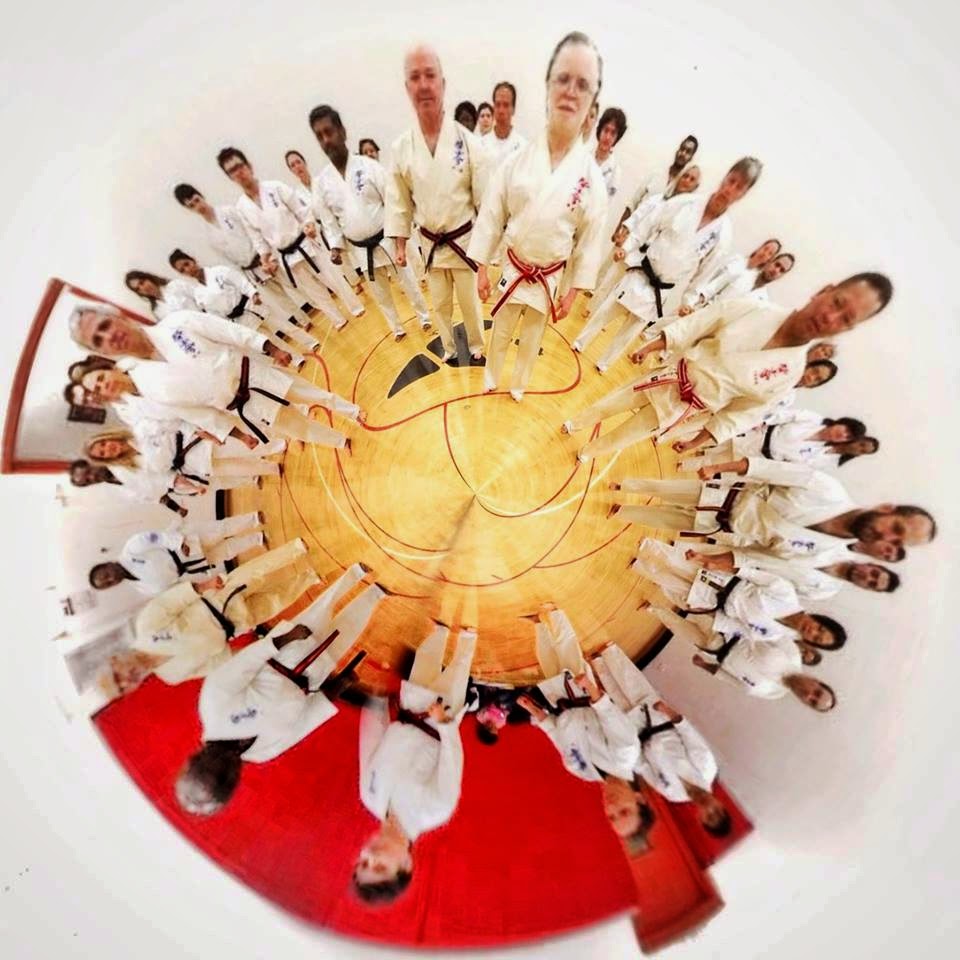 This cool pic was created by a friend of Sensei Jennifer Rennie, a fellow Kenshikai karateka. It shows the magic that is created when 40+ people in gis show up to work out on a Sunday morning. (Apparently some really high level practitioners can hang from the ceiling like bats!)

Ok obviously what this photo really shows is some pretty slick photo editing software. But the actual event, known as "Kagami Biraki", was kind of special.

Wikipedia, the deeply wise source of all useful information, says: "Kagami Biraki (鏡開き) is a Japanese traditional ceremony which literally translates to "Opening the Mirror" (from an abstinence) or, also, "Breaking of the Mochi." It traditionally falls on January 11 (odd numbers are associated with being good luck in Japan) It refers to the opening of a Kagami mochi, or to the opening of a cask of Sake at a party or ceremony." For a great description of how this ceremony plays out in many martial arts dojos, you can read this article: http://fightingarts.com/reading/article.php?id=156, which coincidentally was written many years ago by a very high level Seido Karate practitioner with whom I used to occasionally train.

Actually, it is not really a coincidence. The practice of Kagami Biraki, which most of us just refer to as "New Years Training", occurs in most traditional Japanese dojos here in NYC. I write a lot of blog posts about how all of us, no matter what patch we wear, are doing the same karate. (It is kind of my thing.) But specifically if you practice Oyama, Kyokushin, Seido or Kenshikai you are doing the EXACT same karate, derived from the exact same lineage. And I can guarantee that if your dojo had a Kagami Biraki training yesterday, you and I participated in very similar events. (With the same sore muscles as a result!)

So yeah, we are all one world. And that, in my opinion, is pretty cool.
But that is not really what I wanted to write about today.

I have been training for 26 years, which means I have probably attended at least 20 Kagami Biraki events. Most of them were pretty similar. I wake up early, have some coffee, grumble about the cold, complain about having to put on my gi so early on a Sunday, whine about my stiff sore muscles, and then get ten minutes into training and realize that there is no place I would rather be.

Ok, that is a bit exaggerated. Sometimes the above happens. Other times I get ten minutes into training and go "Hey this is not so bad. This is almost fun. And in just another 40 minutes I can go eat pancakes!"

Since I am one of the higher ranking people in our style of karate, I am often lined up in the front row, facing the rest of the students. I am sure this is meant to be inspirational in some way. It mostly just means that if I slack off, everyone will see me and wonder why that Kyoshi Jennifer is so lazy.

This vantage point also means that I can see everyone else, and about halfway through yesterday's workout I noticed that one of our students, a very nice white belt woman who was literally in her first week of classes, was having some trouble figuring out the combinations. So I left my spot in the front and went over to work out next to her, talking her through the moves and encouraging her to keep going. Then, since I was already back there, I moved over to stand between two of our blue belts, and did some kicks with them. And then I lay down between my daughter and one of our top brown belt kids and made them do knuckle pushups with me, yelling at them to not give up. When I next positioned myself between our top advanced brown belt students, one of the Shuseki-Shihans (heads of our organization) walked by and I smiled at him and said "Now they are motivating me."

It was true. Those last two students didn't need my help any more than the black belts did. They are both strong, athletic karateka who never give up. Being next to them gave me energy.

Eventually I made my way back to the front for the last section (about 100 knee kicks),  the workout ended, and I had some time to reflect. I had not intended on making a statement in any way. Honestly, I just saw one of our students struggling and did not want her first Kagami Biraki to be a negative experience. The rest of it just kind of happened. But in retrospect, I realized that I was very pleased with how it turned out. Instead of in the front row where I normally am, I ended up right in the middle of the pack, punching and kicking right next to our lower belts, doing this Kagami Biraki thing together. And that, I realize, is exactly where I should be. It is who I am in the dojo. It is the kind of "Kyoshi" I want to be.

At the same time this was going on, my husband remained in the front row, pushing himself to go as hard and as fast as he can, motivating others in the room to do so as well. Showing his students that if he could keep going, so could they. When I asked him later if he had planned to do that he said "No, it just made sense at the time."

It was two very different kinds of leadership, and it suited us perfectly.

In my opinion, being a Kyoshi, particularly in this organization we call Kenshikai, should mean different things to different people. Perhaps you are a teacher, like myself and Matthew and a few of the other 5th degrees in our style. Perhaps you are the highest ranking female in your dojo and consider yourself a role model to all the ladies who join. Perhaps you are the right hand of your instructor, advising him or her, supporting them in every endeavor.  But regardless of what you decide it means, you are more than just another student. Yet sometimes, like during Kagami Biraki, you are also exactly just another student, doing the same knee kicks, punches, and pushups as everyone else.  You are a part of the team.

I am not Japanese. But if were to draw my own meaning from the phrase "opening the mirror", it would be this: When you open a mirror, you see yourself. You see who you are. The practice of Kagami Biraki; the hard training, the sweat on the floor, the never quitting, the family that is created when we all train together; this is who I am.  This year, in 2015, I hope to make that reflection someone I am proud to look upon.

Happy New Year to all of you, no matter where you train.
Be strong. Be kind. Be joyful.
Make yourself proud this year.
Osu.