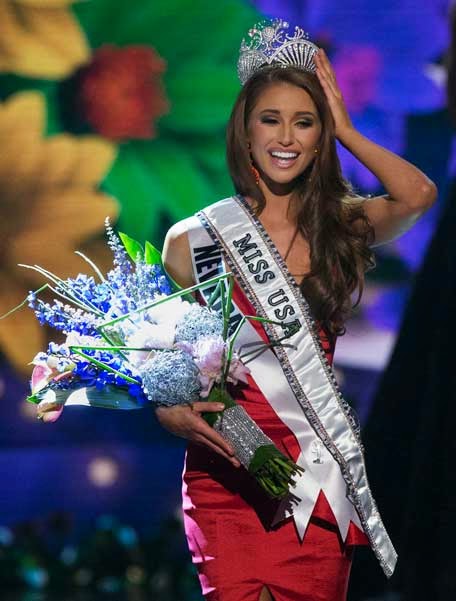 Ok, I’ll bite. You want to know what I think of Nia Sanchez, the newly crowned Miss USA, commenting that women should learn self defense in order to fix the campus rape problem. Or whatever it was she said.

Never mind that it is likely her statements were written by some pageant publicist. Never mind the question of why we would expect Miss Nevada, who is beautiful and seems at least somewhat intelligent, to know how to solve the college campus rape problem.

And never mind that the very existence of a beauty pageant is a direct threat to the whole #yesallwomen movement, that instead of complaining about what she said on stage we should be complaining about why in 2014 there is still a competition that involves women dressing up like princesses and getting scored on how well they curled their hair.

(Yes, I still occasionally watch Toddlers and Tiaras. And yes, it is still horrifying.)

Also never mind the fact that all the news sources are advertising her as a “martial arts champ”, yet I could only find one photo online anywhere of her in her Taekwondo uniform. And before you get the wrong idea,  I am not saying that her fourth degree black belt is illegitimate. I am just pointing out that if you are going to jump on the “strong is the new skinny” bandwagon you should at least have a few photos of her being, well, strong. Instead of just skinny. And beautiful. In an evening gown. With too much makeup.

Here is exactly what Nia Sanchez said: "'More awareness is very important so women can learn how to protect themselves,' Myself, as a fourth-degree black belt, I learned at a young age that you need to be confident and be able to defend yourself. And I think that's something we should really implement for a lot of women."

And here is some of the brilliant criticism she received:
"How did she win after that awful and offensive answer? Idiot."
"I'm sorry, but women shouldn't need to take self defense classes to protect themselves from rape."
"Let's hope Nevada uses her media tour to reiterate that teaching girls self defense is NOT the best way to protect against assault ."
"Miss Nevada described how individuals need to protect themselves from rape, instead of teaching others not to rape. Stop the victim blaming."
"Miss Nevada: How is it a woman's responsibility to learn to protect herself from rape?"

And here is where I piss off some feminists.

Two, there is no excuse for rape. Period. But saying that we should not teach women how to protect themselves because men should not rape is like saying we should get rid of all condoms because teenagers shouldn’t have sex. Or, like my friend Oliver pointed out, like saying we should do away with locks on doors because breaking and entering is against the law. Or like a million other anologies I could come up with. In other words, it is stupid. Why not teach men about consent AND teach women how to do a rear naked choke? Why does it have to be one or the other.

It doesn’t. It shouldn’t.

And while we are at it, all men should take martial arts too. For the same reasons. Because if they are training to become black belts, maybe they will care a little less about hanging out late with their buddies doing tequila shots. Maybe they too will make better choices. And maybe, just maybe, those things will help keep EVERYONE safe.

Of course then she would not have won.

Which, in the end, is what we should really be angry about.