Forget Darth Vadar, Watch Out for That Tree! 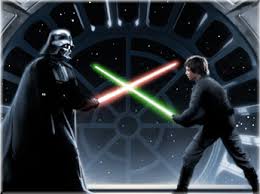 Our society is obsessed with bad guys. Superheroes fighting their nemeses; cops running down stairs, guns drawn, in pursuit of criminals; soldiers hiding in foxholes, ready to take out the enemy. Osama Bin Ladin, bad guy. Adam Lanza, bad guy. Why are people so adamant about owning guns? Because they need to protect their families if and when the bad guys come knocking on their doors. Everyone wants to be a hero, everyone is constantly on the lookout. After all, psychos, child abductors and creepy pedophiles are everywhere!

This morning there was a discussion on one of my favorite blogs about whether or not 8-9 year olds should be allowed to ride the subway to school by themselves if the school bus drivers go on strike. http://www.freerangekids.com/mayor-to-new-york-city-8-year-olds-take-the-subway-alone/ Yes, this is the same woman who let her own 9 year old do just that a bunch of years ago, the same one who is an advocate for allowing kids to explore the world without their parents constantly buzzing overhead. For the most part, I think she's pretty awesome. This conversation got me thinking, however, about self defense and safety, and how the most important aspects are almost never discussed. Instead, its always about the bad guys.

I rode the subway this morning, and I do so almost every day, on my way to jiu-jitsu or the dojo. Not once in the past few months have I been abducted, attacked, mugged, bullied, threatened, inappropriately fondled, pushed on the tracks or had any other encounter with some kind of scary predator. However, the following things did occur:


Fellow subway riders could probably add a million other "normal" occurances to my list, most of them mildly irritating, but harmless nonetheless.


I do not think most 8 year olds should be riding the subway alone, but it has nothing to do with pedophiles or kidnappers. A lot of crap happens on the subway. Most of the 3rd graders I know would barely notice if a bomb exploded on the track in front of them, let alone hear a garbled announcement about a route change. They just aren't that observant. And this is even without the Ipad and the earbuds.

When I used to teach preschool my boss often had meetings about safety on the playground. Don't let them climb too high. Make sure the gates are locked at all times. Watch for strangers. Tie their shoelaces. Don't let them bite each other. You know what we never discussed? How when preschoolers are walking down the street, with their tiny hand in yours, they never, ever look where they are going. They walk into poles and trees. They trip over cracks on the sidewalk. They bump into each other. They even trip over their own feet, tied shoelaces and all.

They get better when they become 8 year olds, but not much.

My husband occasionally holds women's self defense workshops. While he does teach a few helpful strikes and chokes, most of what they learn is how to take a fall safely, how to get someone's grip off of you, and how to get away without getting hurt. And every session, he emphasizes awareness. Look where you are going. Know who is around you at all times. Don't be afraid to cross streets, turn corners or even backtrack if something does not feel right.

It is exciting to talk about the evildoers, to imagine Darth Vader lurking behind every corner. The truth is that most of us will never encounter a "bad guy". But we will step off the curb with our face buried in our Smartphone and nearly miss getting run over by a taxi. (I know, it happened to me this morning.) The music in our ears will block out the sound of the couple arguing behind us, the one where the man is grabbing her arm a little too tightly.  That great book we just got for our Kindle might make us miss the hand in our side pocket.  It is only when our wallet is long gone that we will realize that there was a criminal in our midst.

There are no lockdown drills for this and your impressive gun collection won't help. So while we are teaching our kids to hide under the desk and lock the classroom door just in case a bad guy with a gun shows up, perhaps we could also teach them to walk down the street with their eyes open. Just a thought.

And while we're at it, lets remind ourselves too. (And by us, I also mean me. I am no better than the rest of you.) Lets put our phones in our pockets, at least until we are seated on the L train, safety wedged between a priest and a pregnant lady. Because there is nothing a criminal loves more than a person alone in a dark alleyway, updating their Facebook status.