August 10, 2012
On Tuesday evening, while on my way to my parents house, I boarded the Columbus Avenue bus behind a young teenaged boy. In the typical manner of someone who is not yet comfortable in his own skin, the boy climbed up the steps quickly, threw some change in the slot and proceeded to walk (awkwardly) to the back of the bus. The driver called him back.

"Young man?"
Some incoherent mumbles.
"You only put a quarter in."
More mumbles that sounded vaguely like "no money".
"Ok.Well listen, you are a man right? A young man? So the next time that happens, be a man and say I am sorry driver but I do not have any money today. Don't try to sneak past me."
The kid nodded enthusiastically, like a bobblehead on a windy day. He then slunk his way to the back of the bus, never to be seen again.
The bus driver then turned to me (who had paid in full) and said, "Am I right?"

Sometimes, in life, you can't pay your bills. There are two strategies to dealing with this dilemma. One is to stuff the bill in the bottom of your desk drawer and hope that by the time they call you to tell you that your payment is late you have scraped together enough for the minimum. The other is to call the credit card company right away and cry poor. ("I am so sorry Bank of America! I really really really want to pay you for that big screen TV I bought last month but I just lost my job.  Please please don't hate me!")

But if the bill you cannot pay is your bus fare and you have to walk directly past the bus driver with your 25 cents, you probably should not insult his intelligence. A little honesty goes a long way. (Having a toddler also helps. I once boarded the bus with an empty Metrocard (unbeknownst to me), a diaper bag and an awkwardly folded stroller. I was embarrassed and apologetic. He let me ride for free.) 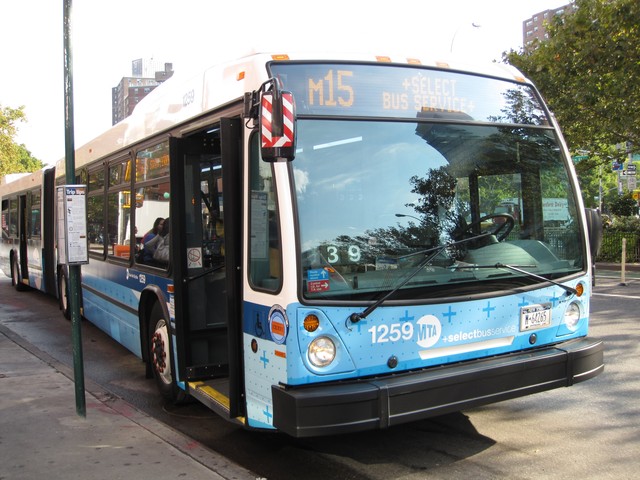 Yesterday I took something called the Select Bus up First Avenue. In order to ride this bus you put your Metrocard (or coins) in a machine at the bus stop to purchase a fare. The machine then prints out a receipt and you can board the bus through any of the three available doors without having to swipe anything. It is fast and efficient. The thing is, no one ever takes the receipt! I know this because the first time I ever took the Select Bus I got on it by accident. After sitting there for a moment I realized that everyone else had some kind of ticket. I sat there anxiously for the whole ride, ready to explain my mistake and fork over two bucks but no one ever said anything. I have ridden it three times since then and despite this miraculous discovery of a seemingly free ride (in NYC no less!) I have bought the damn receipt every other time. No one has ever taken it. I know that no one ever will. So why do I continue to purchase it? And why, as far as I can tell, does everyone else do the same?

If, while walking down the street, we saw a hundred dollar bill on the ground I am sure most of us would take it. (I would.) We believe that this is ok, even though it is not our money, because the person who dropped it is probably long gone. If I leave it there, someone else will just keep in for themselves. If, however, we saw the person in front of us drop the money, most of us would probably tap her and say, "Hey, you dropped this." Why? Because the person is right there. (Struggling with her double stroller and her six shopping bags from Whole Foods.) For us to keep the money would be stealing from an actual person, not an imaginary one who is already ten blocks away. Who am I to ruin her day?

If Maya finds a toy in the playground that she likes, I tell her to leave it there, that the person who owns it will be sad if they come back and it is gone. But if she finds a toy lying in the street (and it is clean and worth keeping) I sometimes let her have it. I tell her to be honest. But if she won first place and her friend is sad that she did not, I tell Maya to not brag about it. If she gets a present that she does not like I tell her to say thank you anyway because it is clearly more important to be polite than to tell the truth. ("Awww, socks? I hate socks!")

Which brings me back to the Select Bus. If I were to skip out on the receipt I would only be cheating the MTA, a giant corporation who mismanages their budget and has done me no favors lately. (Have you ridden the L train? Does it ever work?) Its not like some poor old lady is being robbed of my $2.25. So why do I continue to pay it?

Everyone has a slightly different moral compass. Some people will lie or steal only if their survival depended on it. (If I were broke and needed that bus to get to work I would skip the machine. I would steal bread to feed my family. And so on.) Others will do it whenever the opportunity presents itself, so long as they are not hurting anyone else. And of course there are those who are just dishonest no matter what the consequences. As for me, I continue to buy that silly receipt because sneaking onto a bus feels, well...it feels sneaky. That is why that teenager tried to slip past the bus driver as if he were invisible.  Most of us follow the rules, even when no one is looking, because the alternative just feels icky. Also, we are parents. If you could not explain it to your four year old without cringing, ("Mommy why did you put that necklace in your pocket? Is it yours?") then it probably is not ok.

My daughter, however, will continue to duck under the subway turnstyle until someone tells me that she is too big. Honesty only goes so far, especially during NYC rush hour.